Richmond Opera was founded as Isleworth Baroque by Helena Brown in 2002. Originally dedicated to performing 17th and 18th century operas, the membership voted to rename the group Richmond Opera in 2016 to reflect a diversification into performing operas of other eras.

We generally perform 17th and 18th century works in our main Autumn productions, especially Handel, Purcell, the great French baroque composers and Mozart. Other concerts can range from early music to Gilbert and Sullivan and 20th century songs from the shows. 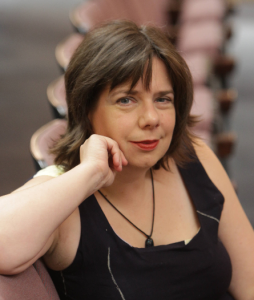 Lindsay read Music at Oxford as an academic scholar. Originally a pianist, she began singing at university and since then has performed across Europe and in Israel and Canada. She specialises in 20th/21st century music and has sung Miss Donnithorne’s Maggot and The Medium (Maxwell Davies), Stripsody, Mere d’Iseut Le Vin Herbe (Ardente Opera), Theodora The Judgement of Theodora (ENO studio), Michael Howard/Tony Blair Newsnight: The Opera (Battersea Arts Centre) and new commission Songs of Dickens by Emily Howard.

She has sung Butterfly’s Mother Madama Butterfly, La Nutrice I Gioielli della Madonna and La Vecchia L’amore dei Tre Re for Opera Holland Park, Baba The Medium for Opera Alegria and also created the role of Gertie in Mike Christie’s The Miller’s Wife. This year she sang in Fulham Opera’s complete Ring Cycle as Flosshilde/Schwertleite/First Norn and as Mistress Quickly in their Falstaff.

Lindsay began working as a conductor in 2009 with Peak Opera at Buxton Opera House as part of the G&S festival, conducting their productions of Yeoman of the Guard and Patience.   Since then she has conducted productions of Madama Butterfly and La Traviata for Park Opera, and was assistant MD for L’Elisir D’Amore for Opera Up Close, A Midsummer Night’s Dream for Co Opera and Strekoza i Muravej for Tête a Tête as well as acting as chorus master for Co Opera’s production of Don Giovanni. She is musical co-director and resident librettist/translator for Opera Alegria.